Do you know that there can be dangerous electrical hazards hiding inside your home?

Can you do anything to keep your family members safe from them? 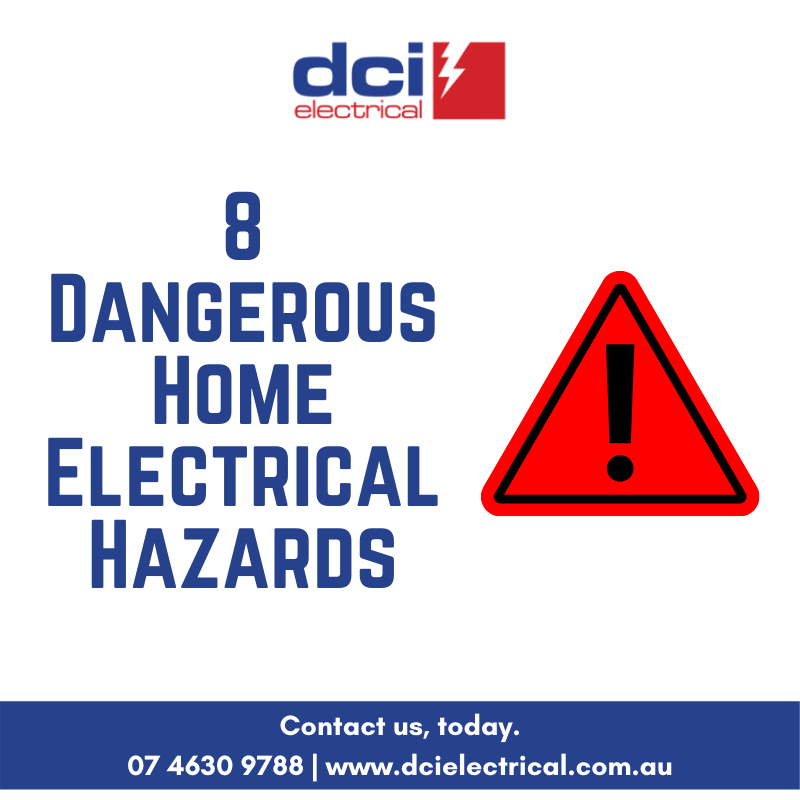 Electricity has brought convenience to humanity, however, there are also hazards associated with it, which we shouldn’t ignore. Let’s read on to learn more about it.

Be aware of these dangerous home electrical hazards so you can fix and avoid them from harming your family.

Given these, it’s important to hire a qualified electrician to regularly check and ensure your wirings are in good condition. They are trained to detect possible electrical issues that can put your family at risk and fix it right away.

Other hazards that are related to electrical wirings are:

Should you see any electrical wiring issues, it’ll be best to refrain from doing it yourself and call a licensed electrician to handle the job for you. This way, you can ensure that your electrical issues are in the hands of a professional. You’ll also be able to avoid getting hurt from accidentally getting in contact with open wires.

No matter what age or style of house you have, you may not have had enough power points installed, and most likely you are using an extension cord around your home. This is considered as one of the dangerous electrical hazards in the home.

You might trip over it and hurt yourself. It’s also prone to overloading and overheating if you are using it with more than 2 appliances at once. Extension and powerboards are not permanent solutions or an alternative for an additional power source. There’s a high chance of electrical overloading on these things.

Covered electrical wirings are prone to overheating and can result in an electrical fire. Keep your cords free and away from things that cover them and cause overheating. Make sure they’re clutter-free with proper air circulation.

You might be surprised to read lightbulbs as one of the dangerous home electrical hazards; But, unfortunately, improper placement of lightbulbs, such as lamps are hazardous for your home. Lightbulbs that are near flammable materials such as drapes, plastics, and upholstery can cause a fire.

Make sure to check the placement of your lightbulbs to avoid this. Should you need to replace a lightbulb, be sure to turn off the switch first so you won’t get electrocuted. Keep in mind to also use the correct wattage to prevent chances of overheating and blowing up of lightbulbs.

Outlets installed in areas where water is present such as the following are also a dangerous home electrical hazard.

Outlets in these areas must be placed with a safe distance, far away, as much as possible form the water source. Water is a good electricity conductor. To avoid electric shocks, make sure to keep outlets away from water sources.

Young children such as toddlers and babies are great explorers. Therefore, their possibility of exploring your outlets is real. For this reason, taking extra safety measures is a must to protect them.

It’ll be best to put a cover on electrical outlets that are within their reach. You may also put away extension cords from their sight. This way, you can protect them from getting injured.

So, in case an electrical fire happens, keep in mind not to use water on it. Instead, use a fire extinguisher to put out the fire. However, if you don’t have one in your home, it’ll be best to shut off your electrical power, go out of the house and call the fire department immediately.

Want to make your family safer from these dangerous home electrical hazards? Install a safety switch or a residual current device (RCD) at your home. However, refrain from doing these on your own. It’s both dangerous and illegal. Rather, call a licensed electrician to do it for you.

If you see any of these electrical hazards at your home, call an electrician to fix them immediately. Don’t just sit there and wait for a family member getting electrocuted before acting upon it. Call us now and we’ll help you.

Why Do You Need an Emergency Lighting Inverter?

Below are three reasons If you’re not sure whether or not you need an emergency lighting inverter in Toowoomba. Read on.

What are the Benefits of Installing Solar Panels to Your Home and Businesses?

If you’re thinking about installing solar panels on your home, here are some things you need to know.

How Many Electrical Safety Checks Should You Have in a Year?

There are a number of safety checks you can carry out on a regular basis to ensure that everything is in working order. How often should you carry out these checks? And what do they involve?

Are Your Smoke Alarms Up to the Latest Australian 2022 Standards

If you’re not sure whether your smoke alarms are compliant or not, then now is the time to check. Read on to learn more.

Here are some electrical maintenance tips on how to keep your Toowoomba warehouse safe when it comes to electricity.

How To Choose The Right Light Bulb For Your Toowoomba Home

Light bulbs are the most common household item in every home. They make up for about one-third of your energy bill. But are you aware that there are different types you can choose from?

Summer is the time to enjoy all things outdoors; however, its scorching temperatures can mean higher energy bills. But don’t fret, there are ways you can enjoy this season and save on your bills at the same time.

What are the Test and Tag Safety Guidelines?

Test and tag is the process that checks the safety of electrical equipment, tools, and even portable appliances at workplaces. This also ensures compliance with the following legislation. Electrical Safety Regulation 2013 AS/NZ 3012 Electrical Installation -...

How to Know If It is Time for a Switchboard Upgrade?

Electrical switchboards are the heart of the electrical operation of any home. However, they can become outdated especially with the growing electrical requirements of various families at home. Therefore, it’s important to know if it is already time for a switchboard...

Do you know that your lights have a significant effect on the aesthetics and ambience of your house? So, whether you’re renovating your home or planning a new build, here are our 7 tips that will help you on how to plan the right lighting for your home.    ...